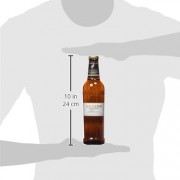 Beer brewed according to the method Alsatian which stands out through the combination of a careful selection of 100% natural ingredients and a slow maturation in the cellar
A perfect combination of French refinement and German character
In the label of A. K. Damm appears a stork because it is the symbol of Alsace, place of origin August Kuentzmann Damm, founder of Damm, to whom it pays homage to this beer

SOURCE: Barcelona, Catalonia
PRODUCER: Estrella Damm
DESCRIPTION:
Made with the four basic elements of beer. A beer very elegant, with complex aromas, and a step of soft mouth.
A. K. Damm is represented as the worthy example of the alsatian in its essence: the smoothness and character. Bottle with an original design and elegant, silk screened with the legend PREMIUM BEER PURE ORIGINAL. Very nice take.
Graduation: 4.8 º
Temperature of service: between 5 and 7ºC
Recommendations: It is recommended to keep in bucket with ice during his service in glasses of white wine. It is important not to fill more than half of the cup to perfectly appreciated all her virtues,.
Beer brewed according to the method Alsatian which stands out through the combination of a careful selection of 100% natural ingredients and a slow maturation in the cellar
A perfect combination of French refinement and German character
In the label of A. K. Damm appears a stork because it is the symbol of Alsace, place of origin August Kuentzmann Damm, founder of Damm, to whom it pays homage to this beer
Consume about 4-6 degrees, to be able to enjoy its flavor and its character refreshing