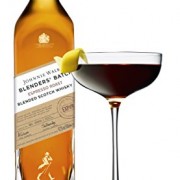 Johnnie Walker Blenders’ Batch Espresso Roast (43.2% abv) is described as a “deliciously rich, smooth and meticulously crafted blended Scotch with punchy notes of rich coffee and dark chocolate”. It is the result of Gibson’s experiments using an inventory of whiskies distilled using barley roasted “more heavily than ever before”. The whiskies have been matured in a combination of rejuvenated casks and first-fill Bourbon casks.

A whisky chaser that would be great with a chocolate stout or a whisky cup of joe!