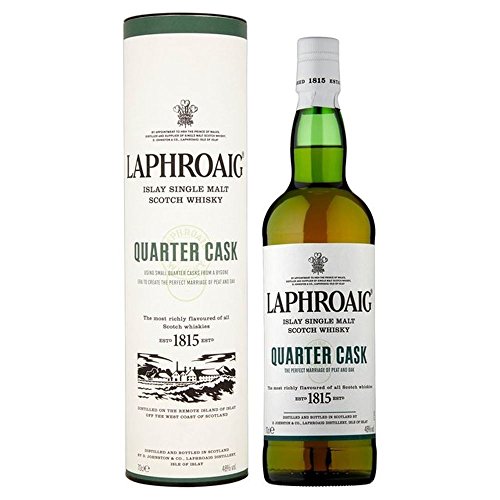 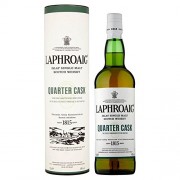 Laphroaig Quarter Cask was from the small barrels (the English word for barrel is cask) inspired, die im 19. Century were used for the storage and transportation of Scotch Whisky on Scotland's mountains and valleys .
This paints the perfect pairing of smoke and oak.
Color: Gold

With the bright gold, the Laphroaig Quarter Cask scotch whisky is in the glass. hints of smoke associated with fruity facets of bananas and coconuts to flow in the room. A composition of fragrance, that is characterized by the maturity and the character. In the mouth the Scotch offers a sweetness that is light but surprised. A touch of aromas of smoked meats, accompanied by the sweetness and complete the composition. The finish is exceptionally long and is perceived as boring. Se presenta con notas ahumadas y especiadas. El Laphroaig Quarter Cask whisky escocés con su contenido de alcohol de 48% vol. una whisky que ha convencido incluso el príncipe Carlos fuerte . Puro o en las rocas de whisky es una verdadera experiencia gourmet.
Laphroaig Quarter Cask was from the small barrels (the English word for barrel is cask) inspired, die im 19. Century were used for the storage and transportation of Scotch Whisky on Scotland's mountains and valleys .
This paints the perfect pairing of smoke and oak.
Color: Gold
Taste: Deep, complex and smoky, pampers the palate but with a surprising, light Sweetness